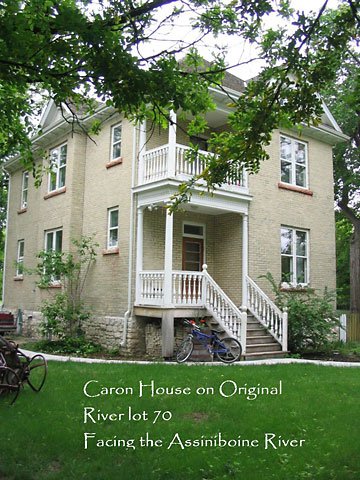 Caron House is one of the last remaining farmhouses on the Assiniboine River inside the city limits. It was built by George Caron in 1906 and was located on an original river lot (1875 survey) that was six chains wide (1 chain = 66 ft.) by four miles deep. Charles and George Caron came from Quebec in the 1880s and purchased 2400 acres of farmland on Lot 70 St. Charles Parish.

The 20-acre Caron Park was established in 1980 when River West Park was developed and the preservation of Caron House in the park was undertaken by the Charleswood Historical Society to save it from being demolished.

Early Charleswood and The Caron Farm

Charles Antoine Caron and George Caron, (a distant relative), came to farm in the Parish of St Charles in 1880. They built a wooden frame home 200 metres west of the later farm site. They purchased 2400 acres of land, stretching from Willow Ridge Road, west to Lot 1 Headingley, and 4 miles in depth. The Queen Anne style brick veneer Caron House, now standing, was built by George Caron around 1906 on lots 71 and 72.

In what is now Caron Park, the Caron Farm had a large barn, a cheese factory, a blacksmith shop and even a windmill for pumping water. A ferry crossing was put in by the Carons to get their produce across the river to St Charles and the Portage Trail. River West Park and Westdale now rest upon just part of the original Caron farm. The area 2 miles south of Wilkes was included in the farms as hay land as it consisted of natural tall grass prairie. 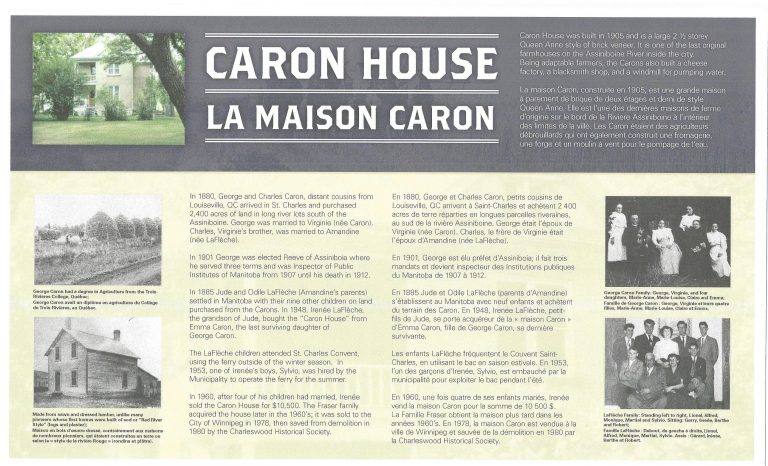 To learn more about The Caron House, Early Charleswood and the Passage...

Made with ❤ by The Orange Group